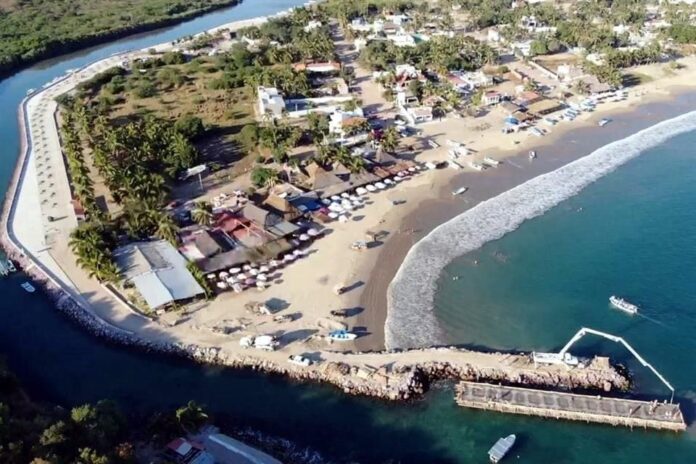 After months under construction, the Malecón in Punta Pérula, a delegation from the municipality of La Huerta, was delivered by the Secretariat of Infrastructure and Public Works (SIOP) to merchants and residents of this tourist spot that represented an investment of 107 million pesos, Enrique Alfaro testified, Governor of the State, as part of the three-day tour of municipalities on the Jalisco coast.

The construction of the boardwalk has a pavement and rock structure, a pedestrian walkway with universal accessibility, three islands with pergolas area, hydraulic paving for vehicular access, lighting, trees, and signage; as well as the construction of a fixed dock, 3 floating docks, a bathroom module, a guardhouse and a palapa for fishermen with a point of sale.

“We walked through this place where what existed before was land, was abandonment, despair and today what we can see is this, first-rate infrastructure, productive projects with the cooperatives of this community that today already have a market in which they are going to to be able to commercialize their products and what we can see above all is the possibility of growing, of developing ourselves with justice and equity, because what this infrastructure generates is an opportunity for development, the possibility of continuing to draw investment “, declared the Governor.

During his work tour, Enrique Alfaro announced hydraulic works for the supply of water and irrigation units in Tomatlán for an amount greater than 255 million pesos (mp).

Likewise, he announced that in a year and a half they will solve the demand for water supply with works such as the drinking water network of the José María Morelos community in which 11.7 million pesos are invested, and the project of risk units in this same town is advancing, which is made up of 6 stages.

“We have already finished the well system that is at this point in the municipality of Tomatlán to reach the town of José María Morelos, we are practically in the community, we are going to finish the connection next year, that is, we are going to have resolved the entire drinking water network of José María Morelos, and the entire system of conduction to this town. In a year and a half, the entire system for the supply of water in this area will be resolved, ”said the Governor.

In La Huerta, the president delivered a module for the sale of fish on Careyitos beach at a cost of 9.5 million pesos, which includes equipment with an additional investment of two million pesos. The module consists of a parking lot, private transport warehouse, vegetation, furniture, walkway to the beach, construction of a deceleration lane for entry.

“Today we see this work crystallized, this exercise of understanding through dialogue and trust building, so the first thing I have to thank is your commitment and trust, for creating conditions to have a model of access to the beaches of Jalisco, and what is delivered today is the possibility of starting that process to access our beaches; cooperatives have to do their part to generate greater investment, greater economic benefit ”, highlighted Enrique Alfaro.

The head of the Secretariat of the Social Assistance System (SSAS), Alberto Esquer Gutiérrez, highlighted the efforts made to, in a first action, be able to free Careyitos beach and make it publicly accessible. He also asked the fishermen’s cooperative and its members to make good use of the new facilities and comply with the agreements for the reactivation of fishing and economic activity.

35 grants from the Fuerza Mujeres program were also given at this event to enhance the capacities of women so that they can generate their own income.

In the Ignacio Zaragoza basic education campus, in El Rebalsito de Tenacatita, 9.3 million pesos were exercised, in addition to having in the next few days a connection to the Jalisco Network and a computer equipment module, as well as equipping the classrooms with air conditioners. There, Alfaro Ramírez promised to intervene in the hydrosanitary network that allows clean drinking water in the homes of this point.

Subsequently, the Jalisco president delivered the completed works of the Wastewater Treatment Plants (WWTP) in the community of La Manzanilla, in La Huerta, with 20 million pesos of investment, and that of Melaque, in Cihuatlán, for 23.5 million pesos.

With these works, significant progress was made in the comprehensive plan of treatment plants with connection to all the rivers that discharge to the Pacific Ocean, where more than 200 million pesos are invested.

Finally, Enrique Alfaro arrived at the beach and inclusive town of Cuastecomates, built-in 2015 and that currently, due to natural phenomena and wear and tear, needed an intervention made by the SIOP for 3 million pesos, in which bollards were replaced, landscaping rehabilitated, removal and replacement of tactile guides, signs, maintenance of public lighting and universal accessibility dock.

With merchants and the municipal president, Fernando Martínez, the Governor mentioned:

“When you enter here you see a first-world place that, from entering the town, any person with some type of disability can even get into the waves of the sea and that, I think, has a very important meaning and value and is an example at the international level because what we are doing here is a show that we can make the beaches of Jalisco be for everyone, “he said.

The Government of Jalisco provided in this tourist point of universal access support to older adults, women leaders of the household, resources for micro-enterprises, where Alberto Esquer, head of the SSAS, reiterated that up to date all the boys and girls of Jalisco already have their uniforms , supplies, shoes and school bags.