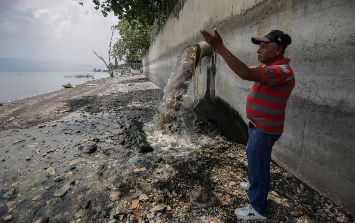 The treatment plant in San Juan Cosalá has had leaks for more than a year, and currently its discharges to the lake are direct

Failures in a treatment plant located in San Juan Cosalá cause constant discharges of sewage into Lake Chapala.

Inhabitants denounced that for more than a year the plant, owned by the State Water Commission (CEA), a dependency of the Government of Jalisco, had presented intermittent leaks.

However, they assured that in recent months wastewater has already been released directly into the lake.

In a tour carried out by THE INFORMADOR, the discharge of the liquid was observed.

A few meters from the discharge, Juan was throwing his net. The fisherman said that it is common to find dead fish on the shore of the lake and, although he acknowledged that pollution is a health risk, he said that selling fish is his way of earning money to support his family.

An interview on the subject was requested from the Ministry of the Environment and Territorial Development (Semadet), as well as the State Attorney for Environmental Protection (Proepa), but they stated that the matter corresponds to the CEA, an organization that did not respond to the request.

The debt of 5,250 million pesos approved to the Government of Jalisco in March 2019 included a purse of 800 million for the construction and rehabilitation of treatment plants.

The governor has assumed the investment of 3,418 million pesos in the Santiago river sanitation plan.

In the streets of the town there are also reports of leaks in drainage registers and the outbreak of sewage.

A few meters from the Health Center, raised on La Paz street, a pool of stinking water is part of the panorama: the liquid runs down to the lake. “It’s a problem for years, neither this administration nor the others have been able to solve it,” said Esther García, a resident of the place.

CEA blames Jocotepec for discharge of sewage into Lake Chapala

According to the State Water Commission, the discharges are due to a plugging in a collector of the municipal drainage network

Although the State Water Commission (CEA) attributed the sewage discharges to Lake Chapala in Jocotepec to the municipality’s drainage network and not to its treatment plant, the City Council said the plant is poorly located. Despite this, specialists point out that the damage has been done.

This media published that, for more than a year, the CEA plant has discharged sewage in Chapala, and although an interview was requested since April, the agency responded yesterday, after the information was released.

“The discharges are due to an extraordinary silting and clogging that the collector on La Paz street presented, which is part of the municipal drainage and collectors network,” said the CEA, and affirmed that the treatment plant “works correctly”, which it can be verified in a face-to-face visit, in the operation and maintenance log and in the quality results of the treated water.

And although he pointed out that the clogging was “extraordinary”, the residents assured that the problem is more than a year old.

Gabriel Garavito, private secretary to the acting mayor, Juan José Ramírez, admitted that the water has flowed from the registers “for years” because the drainage is lower in that area.

Raquel Gutiérrez, a researcher at UdeG, attributed the responsibility to the municipality because it had to maintain the drainage. He urged state and federal authorities to investigate and punish the omissions.

“The damage has already been done, they have already polluted Lake Chapala more, ” he said.