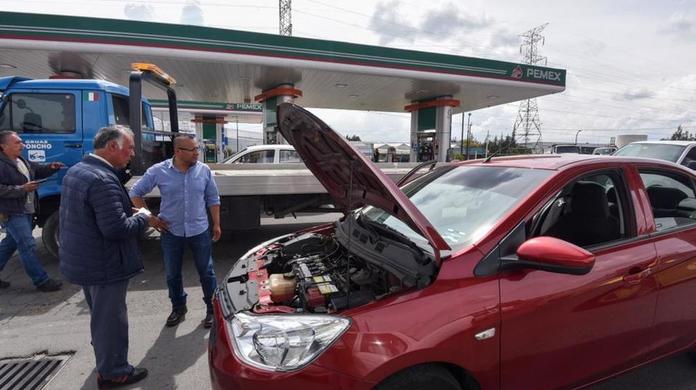 Executives of luxury car agencies in the metropolis confirmed that vehicles that have faults due to adulterated gasoline have arrived at their workshops.

“About eight or 10 cars are arriving every 15 days. The fault is occurring in the injectors and turbos because the gasoline is adulterated, it does not give the octane they need. It has even damaged engines, ” shared an executive who requested anonymity.

He added that they took samples of the fuel to a laboratory and found that it was diluted with another chemical.

They see more damage in cars that are luxury

Felipe Hopfner is among the workers of luxury car agencies whose workshops have been visited by vehicles affected by adulterated gasoline.

He shared that at GH Garage, a business located in Zapopan, eight cars have arrived with breakdowns due to this cause.

“These types of cases usually happen to Premium vehicles, a more commercial car does not suffer from that type of fuel.”

The mechanic stressed that the cost of a repair for poor quality fuel ranges from 2,500 to 7,000 pesos.

Rosa, one of the victims, said that she realized the damage after filling up with gasoline at a service station and verifying that her car lacked power.

“What are they doing to regulate the new gas stations? Previously, Pemex had a part called Third Parties, which regulated all the guidelines from uniforms, signs, gasoline and others, “said the dissatisfied.

Despite the fact that more and more vehicles are damaged for this reason in the metropolis, the Federal Consumer Prosecutor’s Office (Profeco) does not register complaints.

How to detect poor quality gasoline in my car

Remember that gasoline is a hydrocarbon. This is obtained from the distillation of petroleum and is the lightest liquid by-product. The octane number indicates the capacity of the liquid to be subjected to different pressures before generating combustion.

Poor quality gasoline is harmful to any car.

For these reasons, Mexican regulations establish the octane numbers allowed for all types of fuels, such as diesel gasoline and jet fuel. In addition, other measures are established to prevent gasoline from containing elements such as lead, which can cause serious damage to health.

The most common way to create poor-quality gasoline is by adding another substance. The objective is to increase its volume to increase sales by adding hydrocarbons cheaper than gasoline. Products like kerosene, benzene, toluene, xylene, and even alcohol are used for this purpose.

Another way to adulterate gasoline is to mix it with diesel. All of these methods are dangerous and sophisticated. Different hydrocarbons have different ignition points. That is, the heat or pressure to which they can be exposed without exploding varies. Therefore, this adulteration of gasoline is as dangerous as it is profitable.

What Causes Poor Quality Gasoline In The Car