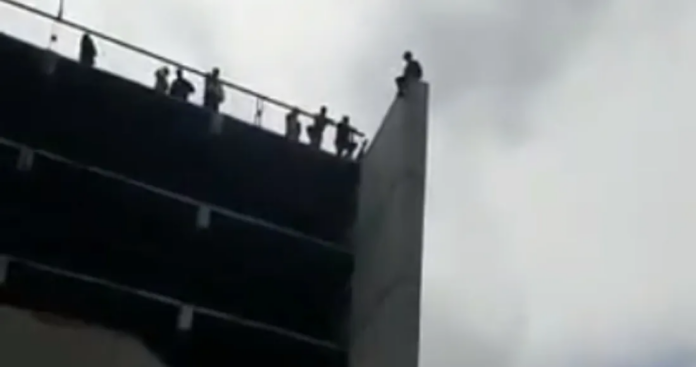 The subject threw himself from the tower of the commercial plaza while the rescuers prepared the mattress to save his life, network users criticize them for taking time to prepare it.

A man killed himself by jumping from a tower, as seen in a video recorded by one of the visitors to the commercial plaza in Zapopan, Jalisco.

The events occurred on Friday afternoon at the El Sol shopping center, when the subject climbed one of the towers of the building that overlooked the parking lot of the place.

The rescuers began rescue work to save him, three were at the bottom accommodating an inflatable rescue mattress to which he could fall safely.

Meanwhile, upstairs were seven people with the man who had decided to kill himself, it is unknown if he tried to persuade him of the decision he made.

At the moment of stretching the mattress to save it from its fall, the subject beat them and threw himself, generating a loud sound that provoked reactions in the visitors.

The video was shared on Twitter and comments are read accusing rescuers of taking too long to inflate the mattress.