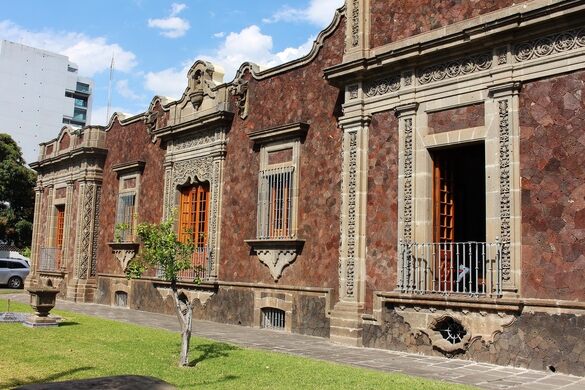 Around 1923, the governor of Jalisco, José Guadalupe Zuno, constructed his house in one of the wealthiest areas of Guadalajara. To decorate the front door, he included engravings of various communist ideals of the time.

The house was intended to be a French chalet, but his friends (including the muralists Orozco and Siqueiros) convinced him to make it a neocolonial mansion. The door is a critique of capitalism at that time.

Among the decorations on the door are hammers, work tools, and a sickle. On one side of the door, aristocrats rest with bags of money, while on the other side a woman takes care of her children and a man works in a mine.

The jewel of the door is its knocker, which is a tiny iron fist with a hammer and sickle symbol.

Zuno was kidnapped in 1974. His captors demanded money and the release of political prisoners from jails across Mexico. Once he was safe, Zuno donated the mansion to the University of Guadalajara which now holds the school’s historical archives.

The Historical Archive is open from 10:00 a.m. to 6:00 p.m. Guided tours can be requested on one side of the entrance to learn the secrets of the residence