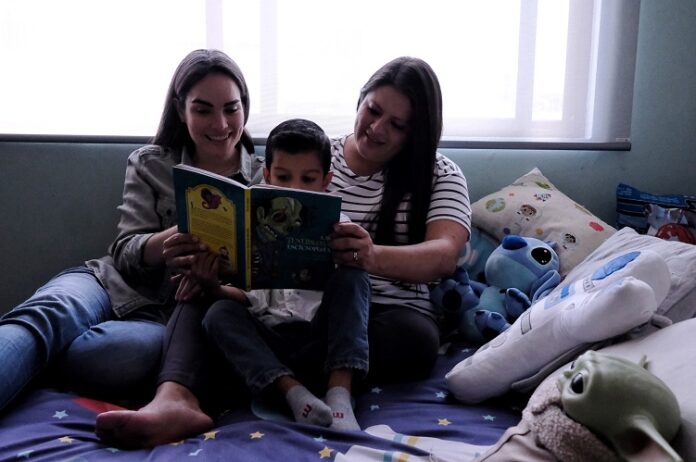 After a process of more than two years, the adoption managed to consolidate

Ricardo is the first child in Jalisco to officially have two mothers: after a legal process of approximately two and a half years, Palmira Martínez Gallardo Valdés and Gabriela Flores Castro managed to adopt and register him as their son on July 13.

“The process has been a bit long because the pandemic occurred and it took us approximately two and a half years to be able to have all the papers and the certificate of suitability; it was somewhat long, but in the end everything was favorable and we are happy with the result”, Gabriela points out. Ricardo is five years old and was abandoned two days after his birth. When he did not find any family member to take responsibility for him, he was left in charge of an agent of the Public Ministry, who, in turn, left him under the protection of a DIF Jalisco shelter; a few months later, Palmira came to that place to work as a volunteer.

“There I met many babies and it was love at first sight with Ricardo, there was a click from a very young age, then I invited Gaby to be a volunteer too, to get involved with the children and meet Ricardo, but we never did it thinking that we could to adopt, rather to contribute a grain of sand to this society “, recalls Palmira.

Gabriela and Palmira married about five years ago, a few weeks after equal marriages were approved in Jalisco. “A whole issue,” says Palmira, and adoption was not yet on her horizon. “But, unintentionally, things happened and people around us told us that if one day we made the decision to adopt, they supported us, that surprised us and that’s when we started talking about it and we made the decision, knowing that we would have support for what could come, “says Palmira. She relates that many things went through their heads: the resistance of society such as Guadalajara, their own prejudices, everything that two mothers with a child would have to face, the issue of school, and everything that parenting implies.

“But since you overcome that and you work on it internally, there is the legal and governmental issue, which is not yet an open question in Guadalajara. If in itself, getting married was an issue, adding adoption was one more level.” The legal file establishes that on February 15, 2020, the empathy process between Ricardo, Gabriela, and Palmira began, “with all the assistance between the couple and the child being favorable, to culminate on May 24 with the adoption judgment in favor of, issued by the judge in charge. Later, on July 13, the child obtained his birth certificate with the surnames of both mothers, a procedure carried out before the Official Office Number 1 of the Civil Registry of the municipality of Zapopan “.

Both women say that today Ricardo is the happiest and you can see the radical change that occurred in him during the months they have been living as a family. “We have psychological support because we want the foundations of his education to be very firm, that he is very clear about who he is, his situation and that he has enough strength to overcome any obstacle in his life,” says Palmira. They both work and in raising their son they have the support of their families. They have fought for what they want and with their example, they seek that Ricardo can also achieve what he wants, that he be free and respect those who do not think like him.

“I would tell him (Ricardo) to try to achieve what he wants, that he will always have support, that he has a family that will be supporting him in whatever his decision is, that he is aware that he will also run into with people who are not going to think the same as him, that this is very valid and he also has to respect it, and that he wants to see what comes and what he wants, because he came to this world to be happy, to be full of love and she will always have the support of her first family nucleus, which is the two of us, and she knows that she will also have that of our families “, Gabriela