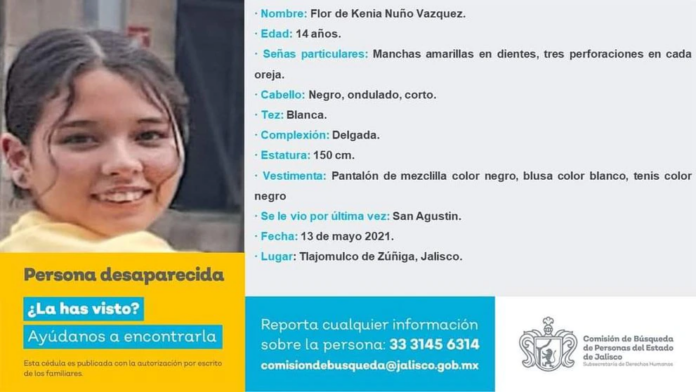 Jalisco continues to accumulate names on its list of missing persons. This Friday, the Commission for the Search for Missing Persons in Jalisco published the files to locate Roxana Dávalos, 16; to Flor Kenya Nuño Vazquez, 14, and Beatriz Esmeralda Galvez, 15, who were seen in San Agustin, Tlajomulco.

The Commission did not establish whether the minors could be victims of a crime; Furthermore, the circumstances in which they were last seen were not reported.

The search for the girl Ivonne Monserrat Angulo Torres, who was reported missing since last April 29, also began on social networks. 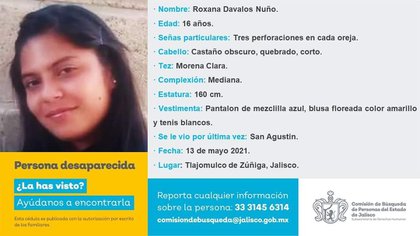 (Photo: Commission for the Search for Disappeared Persons of Jalisco)

After two months, the family of José de Jesús and Abraham Covarrubias continue with the search for these two young men.

According to what was reported, the victims were inside a room when armed men surrounded them and took them out at gunpoint.

Although the family asked to track them through their cell phones, the authorities did nothing about it.

Jalisco has been in the public eye for the kidnapping and murder of 24-year-old Ana Karen; José Alberto, 29, and  Luis Ángel González Moreno, 32.

The victims were at their home in the San Andrés neighborhood, in Guadalajara, when they were picked up by a commando of eight people, allegedly members of the Jalisco Nueva Generación Cartel (CJNG), last Friday, May 7. Two days later, and in the solitude of the highway that goes to San Cristóbal de la Barranca, the bodies of the victims were found dead. The State Prosecutor’s Office has indicated that there is a possibility that they confused the young people.

An indication that the authorities consider relevant is the attack on the personnel of the Attorney General’s Office  (FGR), registered the same night as the kidnapping of the youth.

Half an hour apart, a group of CJNG men attacked an FGR truck in  Tlaquepaque, a tourist center near Guadalajara. The elements were escorting a person, whose home was close to that of the González Moreno brothers, so the criminal group could have mistaken their home.

Meanwhile, the Prosecutor has not wanted to rule out that it was a  direct attack  against young people.

One of the most controversial points of the investigation is related to the discovery of a canvas with a message, abandoned next to the bodies of the brothers: “For the government: This is going to happen to all those in the government who are sent dressed in civilians and in private cars, learn to respect. Do not be sold! We are Mexicans, fucking. Sold sell country! Do you want respect? Give respect, wear government uniforms and cars because the SAME IS GOING TO HAPPEN to all those who are civilians ”[sic] it was read.