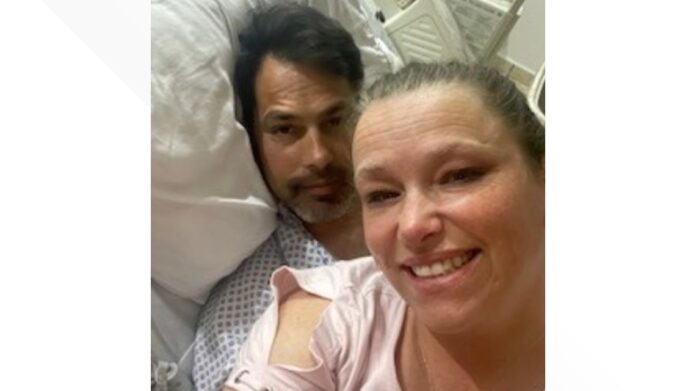 David and Christina Deloyola were originally going to have to pay their hospital bills in full before they would be released from a hospital in Mexico.

PUERTO VALLARTA, Jalisco — Editor’s note: This story was updated on Dec. 14. After seeing the story KGW published on Dec. 14, hospital administrators agreed to work with the couple’s insurance directly to allow them to leave.

What was supposed to be a dream vacation turned into a nightmare for a couple from Aloha.

David and Christina Deloyola planned for months for their pre-Christmas vacation to Puerta Vallarta, Mexico.

“We saved up all year for our dream vacation to come here for a week,” said Christina, David’s wife of 21 years.

On their last day of vacation, the couple went horseback riding. But not long into their excursion, the horse David Deloyola was riding bucked him off, then fell on top of him. David Deloyola was rushed to a local hospital, where he underwent imaging and tests to determine the extent of his injuries.

David luckily wasn’t paralyzed and didn’t break any bones, but the incident left him with multiple tears in his thigh.

The Deloyola’s now have to come up with the money for first-class, non-stop flights with medical supervision to get them back to Oregon, where David Deloyola will likely undergo surgery.

On top of that, it was originally stated that the couple would have to pay for their hospital bills in full before they were discharged. Their insurance would not cover any of the costs upfront but it was believed the Deloyolas would likely be reimbursed at some point in the future. That means the couple was trying to find a way to pay for the thousands of dollars in medical bills, on top of the $4,500 they had already spent.

“They demand payment in full before they release him. They will actually get the police involved and won’t let you leave the hospital unless your bill is paid completely,” said Christina Deloyola.

However, after KGW published this story on Dec. 13, a hospital administrator where Deloyola is being treated and agreed to work with his insurance directly to get the bill paid.

According to AAA Oregon, this is something all travelers should be aware of, especially when traveling abroad.

“Unfortunately, this is something that a lot of travelers don’t think about. Your health insurance will often not cover an injury or an illness if it occurs outside the U.S.” said Marie Dodds with AAA.

That’s why, Dodds said, it’s critical to check with your medical insurance coverage before you travel, and get travel insurance with a medical policy.

The Deloyola’s had travel insurance, but no supplemental medical coverage.

For now, the couple is trying to stay positive while they figure out how to come up with the money to pay their hospital bills and get home to their three daughters in Oregon.

“There’s no one I’d rather be stuck in Mexico with than my husband,” said Christina.