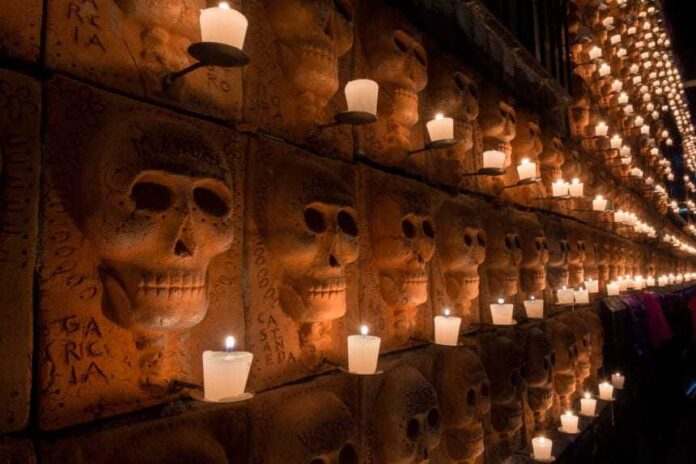 THE NEWS WAS ANNOUNCED BY EFRÉN GONZÁLEZ MINUTES BEFORE THE LIGHTING OF THE INSTALLATION’S CANDLES.

With the news of doing a similar wall, it is how the painter Efrén González lit the candles of the 1,600 skulls that make up his artistic installation, El Muro de Los Muertos, located on one of the walls from the Marcos Castellanos school.

The “new wall of the dead” will be located in La Ladrillera, near his home, to the west of the picturesque town, Efrén informed the hundreds of attendees who came to appreciate the lighting of candles at the November 2 event. that like every year featured cultural presentations.

Efrén explained that he was given the authorization to build a similar wall on the outskirts of Ajijic, but smaller than the one located on one of the walls of Marcos Castellanos Elementary School, which would house 800 pieces of clay, unlike the first one, which has with 1,600 mud skulls.

“I will turn to my neighbors first because they are the ones who deserve the space first, then all the people from Ajijic or who have had something to do with Ajijic,” Efrén said at the event.

He concluded by stating that he will not charge for embodying the names of those who want to be on the new wall; However, it is difficult for him to do so, so he asked that they be generous with the project.