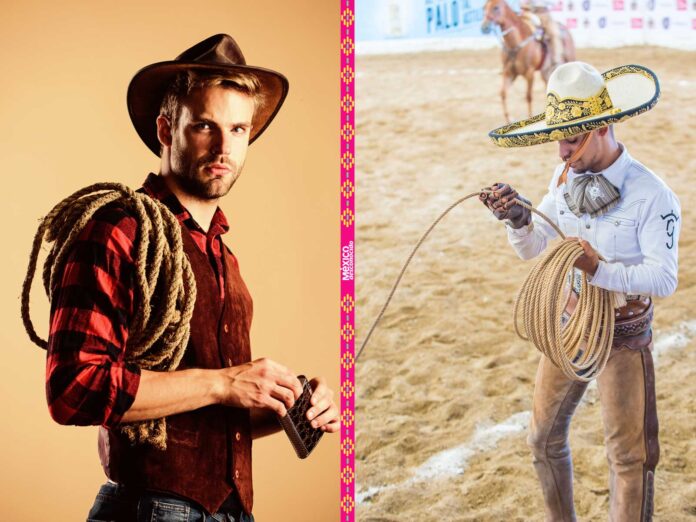 Nothing represents Mexico so magnificently, the Mexican and the Mexicans as the image of the cowboy, who turned charro and originated the cowboy.

“The cowboy is a salaried horseman whose job is to take care of cattle, which originate from the charros of northern Mexico. Today, despite its Mexican origins, the cowboy has become the American hero, the lone horseman who managed to conquer the West on horseback “

The key figures: the rider and the horse

The horse is one of the animals that has lived the most with man throughout history. It was brought to the New World by Christopher Columbus in 1493 on the instructions of the Catholic Monarchs, for which he brought 5 mares and 20 horses to the territory of the current Dominican Republic.

With this noble animal the horsemen arrived in the western hemisphere; that is to say, the people who knew the art of the genet, the way of riding the horse with short stirrups, the genet saddle, leather shield or genet spear. The art of the horseman is, precisely, a legacy of the  Zinethes of North Africa, Berbers whose name gave rise to the word horseman.

The first cuacos in Mexico were the 17 that Hernán Cortés brought when starting the expedition of conquest and that Bernal Díaz del Castillo described in his True History of the Conquest of New Spain. From that moment on, Mexico was forged on horseback and the rider entered Mexican national history to become its protagonist.

Hundreds and hundreds more from Cuba, the Dominican Republic, and Spain were added to the 17 initial horses. Over the decades they were reproduced in such a way that they became an essential element of the New Spain landscape.

According to the research carried out by the historian Luis Romo, the different elements that the figure of the charro gathers are the following:

The print surprises not only for its peculiarity and beauty, but also for its realism. He is not the actor dressed up for a theatrical performance, but rather a character who embodies a long tradition closely linked to the history of Mexico. But what is a charro and what makes him such an attractive figure?

Above all, a charro is an excellent rider and he is so because he has inherited five centuries of equestrian skills.

In the middle of the second millennium, the horse was the engine of the world, warns the Jalisco charro Juan Alcázar Nájera. Many peoples all over the planet lived on it, but the way it shaped the Mexican character was unique. “The horse gives identity to each country in a different way,” he adds.

Synonymous with power and dominance

In the early viceregal times, only the Spanish were allowed to ride. Considered as weapons, the horses were prohibited to the natives. The horse was a sign of dominance. But the lordship of being a horseman spread because the restrictions were soon removed. On the one hand, the new economy of mines, haciendas, ranches, train trains, and royal roads demanded horses driven by good riders regardless of their racial profile.

On the other hand, the Spanish crown had serious difficulties in exercising control of this side of the Atlantic. To this is added that the horse population increased rapidly to the point that many escaped quadrupeds gave rise to huge herds of wild horses or “mesteños”, companions of the herds of bison that ruminated through the grasslands of the north of our country.

Thus, the horse became popular. By 1793, Viceroy Revillagigedo wrote: “horses being very cheap and keeping them, all kinds of people use them.”

From now on, wars and rebellions, works and companies of all kinds would always be carried out in Mexico on horseback, until the times of the Revolution and the Cristero War.

A charro is not only a seasoned horseman, but also a master in handling large cattle. The charras luck or come from the dressage of horses or from the capture and herding of cattle. And this is also a history of five centuries.

Cows and bulls arrived in Mexico with the first Spaniards and found in our country very favorable conditions to multiply. The development of cattle ranching received an additional boost when the rich mines began to operate in the middle of the 16th century, attracting thousands and thousands of new hungry settlers. Thus, cattle became so abundant in New Spain, “that it did not come to have more cost than that of the fatigue of apprehending and killing it,” according to Viceroy Martín Enríquez de Almanza in 1580.

But precisely in a country that still had neither fences, nor fences, nor walls, “apprehending and killing” half-wild cattle was a challenge that became a specialized task. The animals might be priceless, but the ability to capture them was.

And as the historian, José María Murià Rouret explains in his book Origins of the charrería and its name (2010), such skill – from which the charrería derived – originated in Jalisco, especially in its northeastern area known as Los Altos, from the 16th century.

The discovery of the Zacatecas silver veins in 1546 sparked an economic revolution in New Spain. Los Altos soon became suppliers to the Zacatecan mines. Cows and bulls were sent in large herds north along the Camino Real de Tierra Adentro to be slaughtered not far from the mine mouths.

At that time it seems to have arisen the alteña custom of the smithies, periodic meetings of the ranchers to capture the cattle that roamed freely in the forest, mark them, select them, separate them and, if necessary, coat and cure them.

El Herradero was a collective enterprise with a spirit of camaraderie and leisure time. It was also an opportunity to show one’s own ability, compete in the tasks and surely even to bet and show off in front of the girls.

For Murià and other historians, the charrería was born in the herraderos three or four centuries before it was known by that name. That is why it is not surprising that by the 18th century, Nueva Galicia (which encompassed Jalisco and a good part of present-day western Mexico) also exported horses and cattle to the center of the country.

And that charro culture that lived its childhood in Jalisco later expanded through ranches and haciendas, ironworks and rodeos, muleteers and warriors, festivals and fairs to the rest of New Spain and especially to the north, where it would also be transmitted to the Anglo-Saxon environment. , from Texas to the Canadian prairies and from California to the volcanoes of Hawaii.

Origins of the cowboy

In America, there are different names to refer to that figure of the salaried horseman who is located in a very specific way by the teacher Guadalupe Jiménez who organized an exhibition around this identity that was called America, land of horsemen. From charro to gaucho, 19th to 21st centuries.

This figure of the rider was what originated our charro culture and the cowboy culture that supports the American cowboy. The reason? The colonization routes:

“… Where the conquerors looked for gold and silver. The Camino Real de Tierra Adentro, for example, ran from Mexico City to Santa Fe, United States. In these trips that the conquerors made, the horse was fundamental. Each expedition had a group of charro experts from New Spain who drove the cattle and took care of them once they had settled somewhere ”.

Later, in the 18th century, Spain conquered California. This allowed Spanish missionaries to teach North American natives the art of using horses to handle cattle. Over time, California became a center of commerce where people could purchase hides and leather. This led to the cowboys becoming prosperous inhabitants, and new settlers arriving in the region, with the dream of them also becoming successful charros.

However, the heyday of the charros came when the civil war broke out in the United States and there was a great need to produce meat to feed the troops. On average, white charros were paid thirty dollars a month, and Mexican, Indian, or black charros received about twenty dollars. After the civil war, many of these charros, or cowboys, went to live in the West. This gave rise to the mythical Wild West, immortalized in films such as “The Outlaw” or “Centaurs of the Desert”.

Today the cowboy in the United States has his own style that differentiates him from the Mexican cowboy. In terms of clothing, the “Stetson” hat, designed in New Jersey by John B. Stetson, is very popular. Speaking of traditions, one of the most outstanding is the Rodeo, where cowboys compete with each other performing feats such as bull riding or knocking down steers. Although the first rodeo was held in 1888, it is still taking place today, especially in the states of Texas, Nevada, Oregon, Oklahoma, and Colorado.

From Mexican charros to cowboy

The rich Mexican equestrian culture was the basis from which not only the charrería was born, but also the Anglo-Saxon cowboy culture in North America. Myriad terms that Anglo-Saxon cowboys now use derive from the Spanish spoken by Mexican charros.

Some specialists point out that even the name by which they call themselves, cowboy (something like ” muchacho de vacas “), is nothing more than the best translation they found of our word cowboy.

But many other words in the English vocabulary of American and Canadian cowboys were borrowed from Spanish almost as-is. Here are some examples: cinch and cincho; buckaroo and cowboy; rodeo and rodeo, etcetera.

Why is Jalisco most identified with Mexico?

These are the most beautiful churches that exist in Mexico