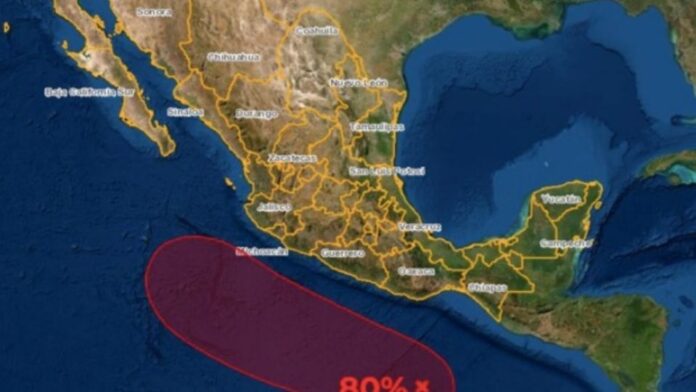 The monitoring of this low-pressure zone is maintained by the National Meteorological Service and at the moment it presents an 80 percent probability for cyclonic development in 48 hours.

Mexico.- According to the notice of the National Meteorological Service, in the next few hours the Pacific Ocean will have the activation of cyclone 16 of the current season, which will be called “Pamela” .

Currently, as a low-pressure zone, it maintains an 80 percent probability for cyclonic development in 48 hours and 90 percent in five days; It is located south-southwest of the Gulf of Tehuantepec, approximately 460 kilometers south of Puerto Ángel, Oaxaca.

The displacement is to the west-northwest at 24 kilometers per hour and according to the estimates of the climate agency, it would be activating as a tropical storm this Saturday or Sunday and would have influence in regions of Oaxaca, Guerrero, Michoacán, Jalisco, and Colima.

The warning for these areas is of heavy rains and considerable winds since the system will remain parallel to the coastline and it is not ruled out that by Tuesday it will have a significant approach to land.

It should be noted that until the system takes the category of tropical storm, the National Meteorological Office will initiate the warning notices on its official website; at the moment it has not driven any.

In the extended forecast, the agency indicates that the low-pressure zone with high cyclonic potential that could evolve into a tropical cyclone, will move to the south of the coasts of Guerrero, Michoacán, Colima, and Jalisco; it will generate high waves in addition to reinforcing the rain potential in the South Pacific and Central Mexico.

Let us also remember that the third cold front of the season is active and this Saturday will cross the north and northeast of Mexico, in combination with a strong pulse of the subtropical jet stream, which will cause gusts of wind of 50 to 70 km / h in those regions. It is expected to dissipate during Monday afternoon.

If both systems collide, the tropical storm could slow down and “park”, discharging significant rains in very specific areas, which is why monitoring and not losing sight of it is important.

The transformation of Mexico into the next great innovation powerhouse

Housing in Mexico, the most resilient sector post-Covid says Mudafy