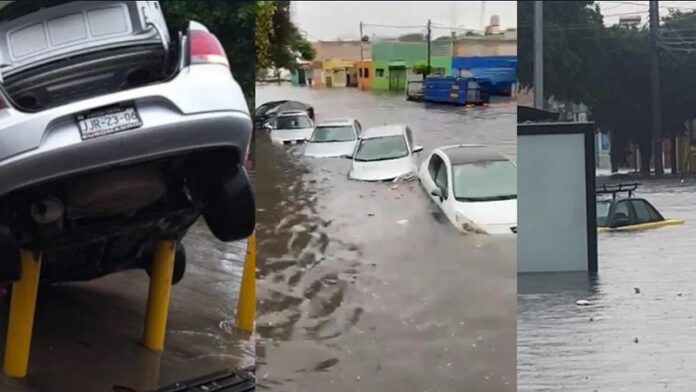 The storm that was registered on Friday, July 16th in the Guadalajara Metropolitan Area, caused several floods, but mainly in the San José Río Verde neighborhood in eastern Guadalajara, the water rose to two meters and entered homes and businesses of the area.

Residents of Hacienda Ciénaga de Mata street, almost at the intersection with Hacienda del Jardín, documented the damage and reported that this is experienced every year in the rainy season.

However, they pointed out that this was one of the times that the water has risen the most, because the street vendors on Hacienda La Calera street in the east of the city, left large quantities of garbage that plugged several sewers and accumulated under a bridge.

Several vehicles were dragged by the strong current, and one of them, when hit against a tree, was a total loss, and the owners said they were upset, because it was almost new.

Finally, it should be noted that due to the frequency with which this happens, those affected detailed that they had already ordered several grids to be made at the entrances of their doors as a solution to prevent them from entering their homes, since their furniture and electrical appliances are damaged with each storm.