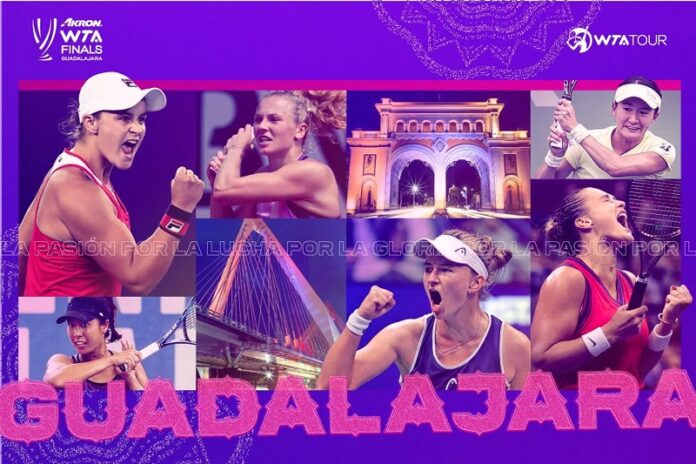 World No.1 player in the world ranking Ashleigh Barty has qualified for the 2021 WTA Finals in Guadalajara, Jalisco, Mexico.

She will be joined by Aryna Sabalenka and Barbora Krejcikova, who are set to make their singles debuts in the year-end championship, along with doubles players Katerina Siniakova, Shuko Aoyama, and Ena Shibahara.

The WTA announced Monday that reigning champion Ashleigh Barty, WTA World No.2 Aryna Sabalenka and this year’s Roland Garros winner Barbora Krejcikova are the first singles players to secure qualification for the 2021 WTA Finals, to be held in Guadalajara, Mexico.

They will be joined at the prestigious year-end finale by Katerina Siniakova, who qualifies in doubles with partner Krejcikova, as well as the all-Japanese pairing of Shuko Aoyama and Ena Shibahara, who will be making their debut at the WTA Finals.

Guadalajara is playing host to the season-ending tournament for this year only, with the event returning to its home in Shenzhen, China, from 2022 through 2030.

Ashleigh Barty, who sits in pole position on the Porsche Race to the WTA Finals, qualifies for the year-end finale as the defending champion. She won the WTA Finals Billie Jean King Trophy in 2019 at the first staging of the event in Shenzhen, China. The Australian competed in the doubles field at the WTA Finals in 2017 alongside Casey Dellacqua and made the semifinals in 2018 with CoCo Vandeweghe.

“Lifting the Billie Jean King Trophy in Shenzhen in 2019 is one of the best moments of my career,” Barty said. “It’s a great honor to be among the Top 8 players in the world and be the first to qualify for the 2021 WTA Finals.”

The WTA World No.1 has won a tour-leading five titles across all three surfaces this season, including the Yarra Valley Classic (Melbourne), defending her title at the Miami Open presented by Itaú, the Porsche Tennis Grand Prix (Stuttgart), capturing her second Grand Slam trophy at The Championships, Wimbledon and the Western & Southern Open (Cincinnati).

WTA World No.2 Aryna Sabalenka will make her debut singles appearance at the year-end showpiece, where she competed in the doubles field in 2019 with Elise Mertens. She becomes the first player from Belarus to qualify for the WTA Finals in singles since Victoria Azarenka, who was runner-up in 2011 and last qualified in 2013.

Sabalenka has won two titles from three finals this season, including the season opener at the Abu Dhabi WTA Women’s Tennis Open and the Mutua Madrid Open. She also enjoyed a runner-up finish at the Porsche Tennis Grand Prix (Stuttgart), in addition to making her Grand Slam breakthrough by reaching the final four at both Wimbledon and the US Open, in the process achieving a career-high ranking of No.2 on Aug. 23, 2021.

Already an established doubles presence at the WTA Finals, the Czech Republic’s Barbora Krejcikova has earned her first singles qualification this year, and in 2021, she will be the first player to contest both singles and doubles since Karolina Pliskova in 2016.

Krejcikova made waves early in the season when she reached her first tour-level singles final since 2017 Nürnberg at the Dubai Duty-Free Tennis Championships. A few months later, she went on a 12-match winning streak to capture her first WTA singles title at the Internationaux de Strasbourg before a fairytale run to the Roland Garros trophy, where she also won the doubles title. At her next event, she reached the last 16 at Wimbledon before picking up a title on home soil at the Livesport Prague Open. Following her triumphant run in Paris, she made her Top 20 debut at No.15 and cracked the Top 10 on Aug. 9, 2021. Most recently, she reached back-to-back quarterfinals at the Western & Southern Open (Cincinnati) and the US Open.

The Czech duo of Barbora Krejcikova and Katerina Siniakova will appear in their third consecutive WTA Finals together, with the pair’s best result coming with a runner-up finish in 2018 when they fell to Timea Babos and Kristina Mladenovic. They also earned a qualification spot in 2019 at the first staging of the Shiseido WTA Finals Shenzhen in Shenzhen, China. They will look to become the first all-Czech pairing to capture the WTA Finals Martina Navratilova Trophy and the first Czechs overall since Andrea Hlavackova’s run to the title in 2017 with Timea Babos.

The former WTA World No.1 doubles players, who first played on tour together at 2014 Nürnberg, have won three doubles titles this season at the Gippsland Trophy (Melbourne), Mutua Madrid Open, and Roland Garros – their third Grand Slam doubles title as a team following Roland Garros and Wimbledon in 2018. The Czech pairing also reached the championship match at the Australian Open this season and won gold medals at the Tokyo 2020 Olympic Games.

Japan’s Shuko Aoyama and Ena Shibahara have earned their career first qualification at the WTA Finals, becoming the first Japanese players to qualify in doubles since Ai Sugiyama in 2008, when she reached the semifinal stage alongside Katarina Srebotnik.

Aoyama and Shibahara have clinched a tour-leading five WTA doubles titles this season, starting with back-to-back triumphs at the Abu Dhabi WTA Women’s Tennis Open and the Yarra Valley Classic (Melbourne). They won the biggest title of their careers at the Miami Open presented by Itaú in April before picking up two additional titles at the Viking International Eastbourne and Tennis in the Land (Cleveland). At the Grand Slams this year, they posted their best results at Wimbledon by reaching the semifinals and Australian Open with a quarterfinal appearance.

The 2021 WTA Finals features the Top 8 singles players and doubles teams on the Porsche Race to the WTA Finals – which includes 51 WTA tournaments and four Grand Slams. They will compete in a round-robin format, where the singles champion will be awarded the Billie Jean King Trophy. The doubles champions will earn the WTA Finals Martina Navratilova Trophy.

The latest Porsche Race to the WTA Finals Leaderboard: