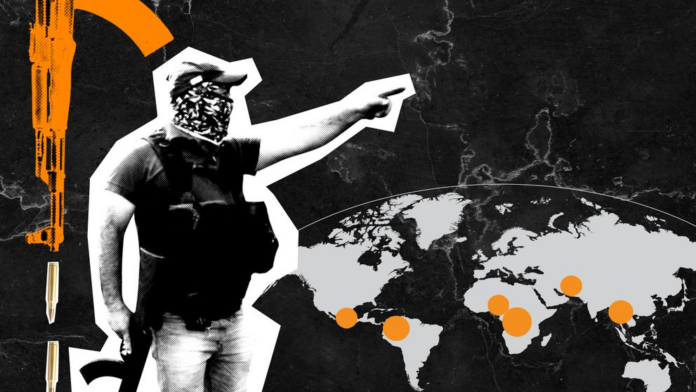 More than the coronavirus, unemployment, and corruption. When Mexicans are asked what the country’s biggest problem is, the spontaneous answer that always wins is organized crime. This perception does not come from nowhere.

According to the report Global Initiative against Transnational Organized Crime 2021, Mexico is one of the countries most affected by organized crime, only below the Democratic Republic of the Congo (Africa), Colombia (South America) and Myanmar (South-West Asia ).

The study – based on a list of 193 nations belonging to the United Nations (UN) – indicates that maritime trade is one of the most pressing problems for crimes of this type.

In 2019 it was detected that at least 80 percent of world trade moved through the sea. Various investigations indicate that the illicit market occupies the same maritime infrastructure as the legal businesses, which makes the waters a vulnerable market.

Crime has many faces in Mexico, one of them is related to environmental crime. According to the Global Initiative against Transnational Organized Crime 2021, the country fights crimes such as wildlife trafficking, fuel smuggling, and the timber industry. The investigation warns that Latin America consolidates the dishonorable title of being the region with the most environmental crimes.

The analysis explains that although in Mexico there have been strategies to combat drugs and organized crime, this evil continues to afflict the country because “democratic values ​​and the defense of the rule of law have been compromised.”

One example is the intricate corruption at all levels of government. According to studies carried out by Lantia Intelligence, in at least 53 Mexican municipalities there is a presence of criminal organizations, which are closely related to local administrations. And those in which criminal groups are most powerful are where there is no state interference.

Some drug trafficking experts point out that “investing money to combat crime in a state with so much infiltration of criminal groups in its structures is useless.”

A study based on the Global Initiative against Transnational Organized Crime 2021, indicates that Mexico is the fourth most vulnerable country for organized crime

The conclusions draw cocaine trafficking is the illegal market that proliferated the most, with a continental average of 7.41, the highest of any continent (the higher the average, the higher the crime rate). According to the numbers, Colombia occupies the first rung of coca trafficking, with 9.5 points. It is followed by Mexico, with 9.0; Guatemala, with 8.5 and Haiti with 8.0. In addition, the shipment of synthetic drugs grew during the coronavirus pandemic.

Another common crime around the world is arms trafficking. The nations with the highest smuggling are the Republic of the Congo, Iraq, Afghanistan, Mexico, Colombia, and Nigeria. These are precisely areas where there is a strong presence of militias.

“Mexico has a well-established arms market and serves as an important conduit for the flow to and from the United States and Central America, which has had a devastating impact on the levels of armed violence and criminal weaponry,” the article reads. study.

Will AMLO let the DEA back in Mexico?

Every five hours a child disappears in Mexico