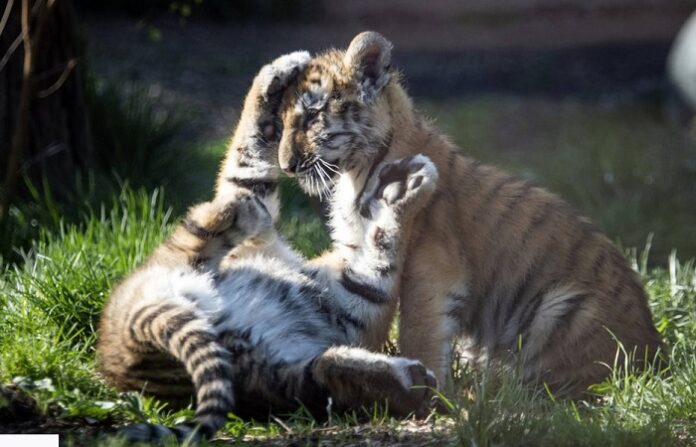 Guadalajara (Mexico), Oct 9 (EFE) .- Four Bengal tiger cubs, an endangered species, are the main attraction of the Guadalajara Zoo (western Mexico) that protects them after their birth three months ago.

With the color of their fur, the four tigrillos, two males and two females are a spectacle for zoo visitors, who laugh and are touched by their clumsy movements, the games between them, and the relationship with their mother, Chitara, who protects them at all times.

Nadya Herrán, a veterinary specialist and caretaker of tigers, explained to Efe that the cubs now weigh 12 kilos and were born last July as a result of the natural courtship of their parents and through a night birth.

“Once we see the birth approaches, we leave the tigress in a special bedroom so that she feels comfortable and calm to give birth, they were born at night, we did not have to see the birth. She is a newcomer and has shown an excellent maternal instinct, she watches over them all the time, licks them, cares for them and breastfeeds them ”, she revealed.

The bengal tiger is a subspecies in danger of extinction due to hunting and increasingly fierce competition to stay in its habitat, which is mainly the temperate forests of Asia.

During the first month the mother and the puppies stay in the bedroom so that the little ones are protected while they breastfeed and, as they grow, they detach more and more from her and begin to play and explore the place where they live.

The specialist explained that the tigrillos are in the process of leaving their mother’s milk and being fed solid foods that consist of red meat dumplings with chicken meat, as well as special croquettes for felines that serve as vitamin and mineral supplements.

The cubs are Chitara’s first litter and when they reach adulthood, that is after they are 20 months old, they could move to some other zoo to prevent their dad, a tiger named Albert, from demanding their territory and making them hurt.

“The natural history of tigers is that they are solitary, usually the adult males maintain a territory by themselves and the females stay with their young sometimes up to three years to teach them to hunt, to protect themselves and they are gaining their own territory”, he indicated.