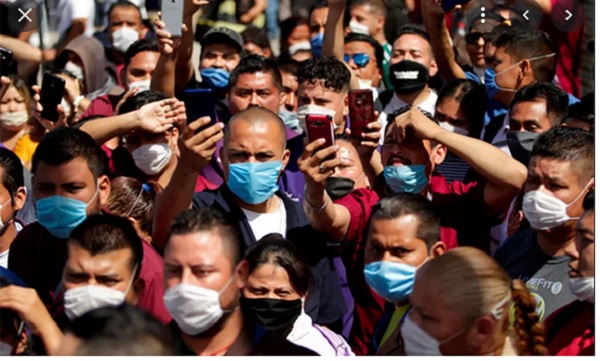 In the State of Jalisco, if you don’t wear a mask in public or recreational spaces, you could spend up to 36 hours in jail or receive a fine of up to 1,400 pesos.

Deputies of the Health Commission of the local Congress approved modifying the State Health Law and, if they are approved by the Plenary, authorities will be able to sanction establishments and citizens who fail to comply with preventive measures established during a health emergency.

The amendment, endorsed by a Commission chaired by deputy Arturo Lemus of the Moreno party, indicates that, in the presence of communicable diseases in a population, region, or throughout the entire State, measures must be taken to prevent their spread.

“The State Executive, through the Ministry of Health, may order the mandatory use of face masks or proceed to sanction non-observance directly or in coordination with municipal authorities in the event of a serious epidemic caused by any disease and/or infection acute transmissible by the respiratory system,” Lemus said.

Among the actions that would be implemented is the mandatory use of face masks in all public spaces, whether indoor or outdoor establishments, and when taking public and private transportation, including buses, trains, taxis, and mobile app transportation services such as Uber or InDriver.

Establishments that fail to comply with provisions imposed by the authorities during a health emergency could face temporary or permanent closure, partial or total, depending on the seriousness of the violation.

Citizens who decide not to wear a mask in public spaces would face arrest and up to 36 hours in jail, with the possibility of commuting the jail time with up to eight hours of community service or by paying a fine of up to 1,400 pesos.