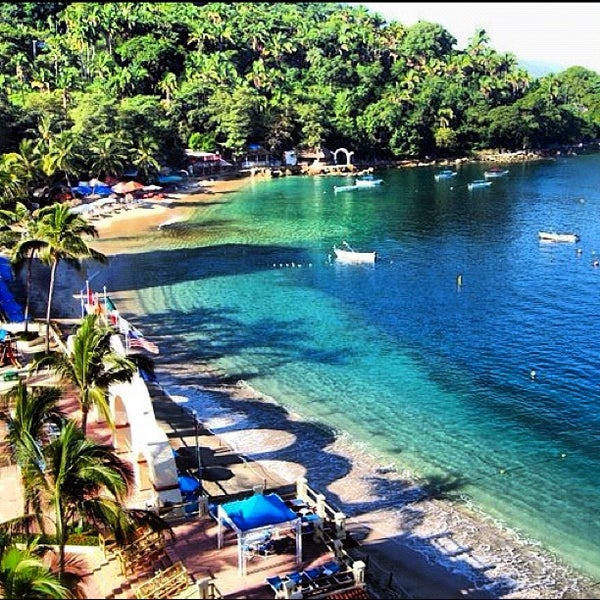 Often falsely credited for the colonization of Puerto Vallarta, Mismaloya is a lovely settlement about twelve kilometers from the city. In 1963 the Hollywood director, John Huston, chose it for the location of his movie, The Night of the Iguana, based on the Tennessee Williams book of the same name.

Though Puerto Vallarta was already a well-established town and never the “small fishing village” so claimed in many publications, the greasepaint image bestowed by the invasion of Hollywood has always been hard to shake. There’s no denying that the sizzling affair between Liz Taylor and Richard Burton put Puerto Vallarta on the map in a particular way but their romance didn’t take place in Mismaloya. Indeed sets were built there and lives disrupted but Liz and Dick did their hanging out in town.

A small set for the Huston film has crumbled to ruins, and the remains of separate structures that were constructed for other movies (and often mistaken for those of the Iguana sets) are only a shells left behind. The beach, however, is a fabulous destination and a great place to schedule a boat tour for fishing, snorkeling or SCUBA diving. Many dive-masters make their home in Mismaloya. Their well equipped skiffs, called pangas, are easy to board from the beach and usually supplied with dive equipment and fishing gear.

The name Mismaloya comes from the Nahuatl language and translates to “place where they grab fish with their hands” and, when one watches the boats come in with their daily catch, it’s easy to see how the name was earned.

Palapas hug the shoreline, home to many beach cafés, many belonging to families who have owned them for decades and can tell you all about the rambunctious times of when movies were filmed in Mismaloya. Excellent margaritas, made from scratch, ceviche with the freshest ingredients, and delicious nachos are well priced and well portioned.

Vendors at Mismaloya have great bargains for all the same items you would expect at Playa de los Muertos, the beach in town; silver, beads, blankets, carvings, baskets, hammocks, sarongs, etc. Don’t be afraid to bargain but remember this is how they make a living and feed their families. Mismaloya is also a great place to get hair braids, a foot massage or a temporary tattoo.

The view of Los Arcos is unparalleled and is a quick trip on a panga to this natural formation of volcanic rocks sprouting from the ocean. Angelfish and other tropical species are amazing, along with the cliff-life, including the pelicans, terns and the famous blue-footed booby. It’s long been a destination for swimming and diving. Don’t forget your camera.