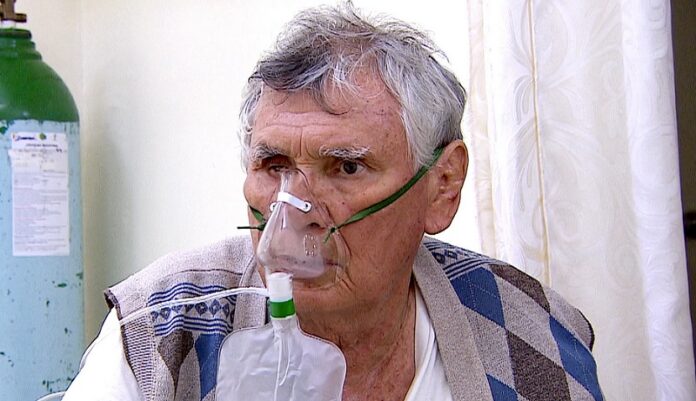 Miguel Ángel Félix Gallardo appeared in a wheelchair in the maximum-security area of ​​the Puente Grande state prison, in Jalisco. It was an afternoon, at the beginning of August, and he was coming from the prison’s medical ward. His left arm was in a cast because he fell a few weeks ago. He has lost vision in one of his eyes and is deaf in his left ear.

Those last two conditions made the interview a bit difficult, so we had to write the questions on a poster board for him to read.

“I have half my body paralyzed,” said Félix Gallardo, 75, the co-founder of the Guadalajara cartel, one of the first drug trafficking organizations in Mexico.

Few traces remain of the man who during the 1980s was considered one of the most powerful criminal leaders in the world.

“My health is terrible. My family is digging a grave so that I may be buried next to a tree. My life expectancy is nonexistent. I lost everything: I lost sensitivity, my hearing, my eyesight,” said the man known as “The Boss of Bosses,” while complaining of the health ailments that have plagued him in recent years.

The first question was why, after so many years, he had decided to grant an interview. It was a very big question, because it took me five years to meet him. In April 2016 I had the first contact with one of his lawyers in Mexico City.

It took five years and four months to face him.

“Are you asking me why I am granting you the interview? Because of your relentless efforts! Your strong efforts,” he said, knowing better than anyone I hadn’t stopped insisting during all these years.

Félix Gallardo was first arrested in April 1989 and has spent 32 years in prison in Mexico for the 1985 murder of U.S. Drug Enforcement Administration agent Enrique “Kiki” Camarena Salazar. In 2017, he was re-sentenced to 37 years for Camarena’s murder; other charges included stockpiling weapons, bribery, murder, drug trafficking and money laundering.

His initial trial was the longest in Mexican history, lasting more than 28 years until his conviction in 2017 for the murders of Camarena and Mexican pilot Alfredo Zavala Avelar.

In various judicial and academic investigations, Félix Gallardo was closely linked to the beginning of the large drug trafficking organizations in Mexico. According to the DEA and multiple investigators, Félix Gallardo, along with Ernesto Fonseca Carrillo and Rafael Caro Quintero, founded the organization the DEA would name the Guadalajara cartel.

Though the three men were convicted for their participation in the kidnapping, torture and murder of Camarena Salazar, only Félix Gallardo remains incarcerated.

Drug trafficking has raised the levels of violence and conflict in Mexico. In 2019, the Mexican government increased the number of people who have disappeared during the war on drug trafficking to 60,053. In 2020 alone, a total of 34,515 homicides were registered. According to organizations such as Semáforo Delictivo, about 80 percent of these homicides are related to drugs and drug trafficking.

Many things have been said about Félix Gallardo — that he was a businessman with a lot of money in Guadalajara and that politicians, governors and public officials attended his parties.

Recently, the popular Netflix series “Narcos: Mexico” chronicled his life as the co-founder of the Guadalajara cartel, as the first drug trafficker to create a bridge between South America and the United States for the export of cocaine — negotiating with Colombian drug traffickers such as Pablo Escobar. On-screen, he’s depicted as a man with smart and innovative ideas who was able to unite different criminal organizations in a kind of federation of drug traffickers.

In popular culture, he’s known as the “The Boss of Bosses,” and though it hasn’t been confirmed, most people associate the popular song from the group Los Tigres del Norte with the drug lord. His name is still seen on T-shirts.

Félix Gallardo was 28 when he was first sentenced by a judge in Jalisco. He has lost all hope that he will be released and believes he will die in prison.

This is the first interview that Félix Gallardo has granted during his sentence.