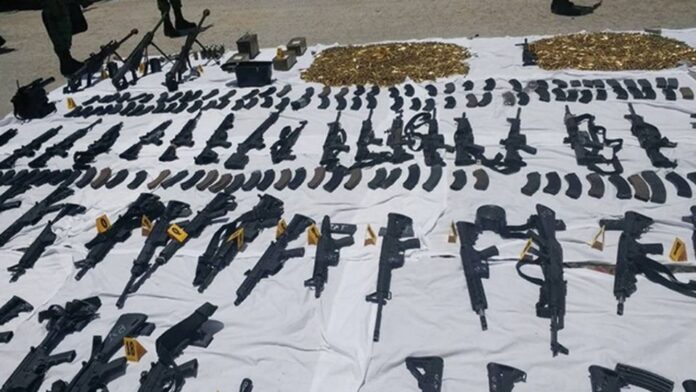 An operation by the Jalisco Secretariat of Security in a warehouse in Tlajomulco, in which large caliber weapons were located, culminated in the capture of two smugglers in the United States, a mother and a son, who sell the weapons. The woman has already been sentenced in the neighboring country.

On April 19, 2020, on the road to Morelia at its junction with the Railroad, there was a confrontation with armed subjects who were guarding the warehouse. State Police officers secured double-bottomed trailers, motorcycles and luxury cars, as well as 14 firearms, including three M249 military-grade machine guns valued at up to $ 8,000 each.

On that occasion, one of the 26-year-old subjects was killed by state officials. Based on the different investigations of the State Prosecutor’s Office, the deceased was linked to an organized crime group that operates in the area.

The trailers that were in the warehouse are presumed to be used for the transfer of illegal weapons.

The joint collaboration of the State Security Secretariat and the Agency for Alcohol, Tobacco and Firearms and Explosives (ATF), resulted in obtaining the information that linked Norma Llamas Rodríguez, 47 years old, from Utah. Together with her 21-year-old son Carlos Arturo García, the woman bought 49 high-powered weapons to sell in Mexico and part of the border, including the three M249 machine guns secured in the warehouse by the state police.

Llamas Rodríguez was sentenced to 52 months in prison in the United States, while a court will later issue the sentence for her son.

Salt Lake City ATF agent Michael Minichino stated in Utah media that Llamas Rodríguez bought the 49 guns and quickly arranged them to smuggle them into Mexico.