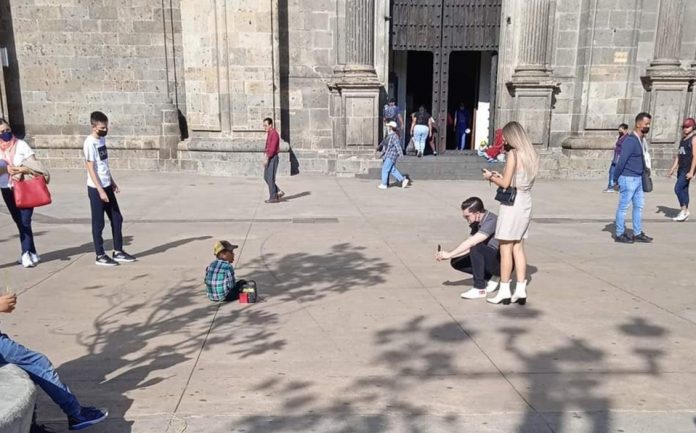 A couple decided that the best they could do in front of a child who was singing on the floor and asking for money, very close to the Cathedral, was to photograph him.

Guadalajara, Jalisco.- A couple decided that the best they could do in front of a child who sang on the floor and asked for money, very close to the Guadalajara Cathedral, was to photograph him, as if he were something exotic.

Someone caught the moment, and shared it on Twitter, on the Whitexicans account. Immediately the photo of the young photographers went viral.

In the image, the man is seen crouching with a camera, pointing at the minor, sitting on the ground, while the woman appears standing checking her cell phone. “Whitexicans in the wild,” they wrote on Twitter from the Whitexicans account, to describe the image.

The reactions to the image of the couple were also viral on social networks, the two young men were branded discriminators, racist, among others. In addition to accusing them of a false degree of superiority when portraying the minor.

Among the reactions, both positive and negative, on Twitter we read: ” Discrimination after all “; ” Hdp what do you see? Not even if it was something strange, those people shit me ”; ” This is in Guadalajara, this Child is famous and sings very beautifully, they record it because he does it very well … Channel 4 in Guadalajara made him famous with a report”; “It is clear that any BA-BO-SO with a camera feels like a historian”; “Whitexican Geographic”; “I thought it was Samuel García and his wife.”