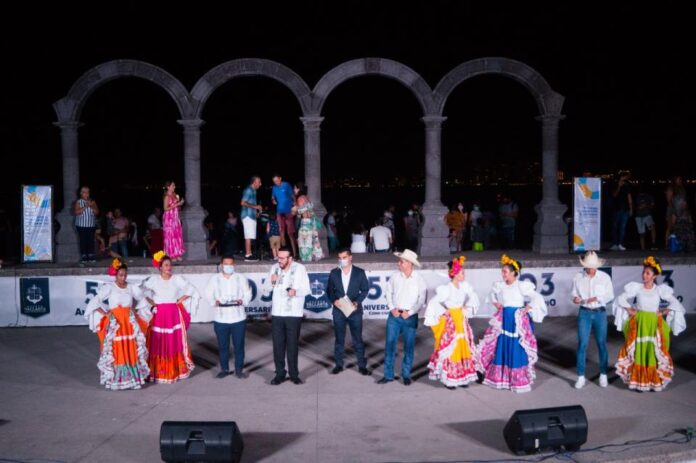 Puerto Vallarta was celebrating on May 31, commemorating the 103rd anniversary of its creation as a municipality and 53 of its elevation to the city, with a program organized by the Municipal Tourism Directorate and the City Council.

Folklore 2021 was hosted in the dome of the La Lija Sports Unit, from Coapinole, with different regional dance groups.

From May 29 they carried out a series of shows with all the colors and Mexican rhythm, with free admission.

This Monday was very emotional: in the morning the solemn session of the Cabildo and from 6:00 in the afternoon, Vallartans and tourists enjoyed a traditional kermes in the Plaza de Armas, with different typical snacks, desserts and drinks.

Later, in the Arcos of the Aquiles Serdán Open Air Theater, at 8 o’clock at night, the folkloric groups of CECYTEJ and Vallarta Azteca performed, with their zapateados. The mariachi Los Nietos by Sebastián Lupercio, the mariachi Tierra de Cocula and the Juvenil Aztlán from Tepic Nayarit also delighted with their music.

And to close with a flourish, the fireworks were lit on the city’s boardwalk; With the support of Citizen Security, Civil Protection and Firefighters, the sky lit up with a thousand colors, causing the amazement of locals and strangers, in honor of the destination that enamors the world with its magic, colors, flavors and with the warmth that characterizes the Vallartans.