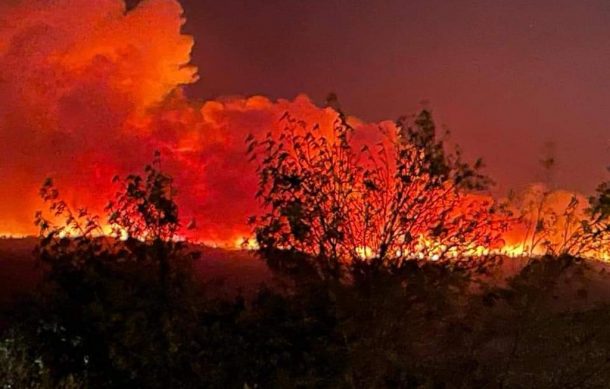 GUADALAJARA, JALISCO (April 15, 2021).- Once again, Guadalajara’s iconic Bosque de La Primavera registers a forest fire. This time in the Volcanes area, in the area of ​​influx, according to the Ministry of the Environment and Territorial Development (Semadet).

This is just one week after the fire registered in the Las Canoas area in the so-called “lung of the city” was liquidated. This after five days of combat and 4,500 hectares consumed.

300 elements of the three levels of government are fighting the fire, according to Commander Sergio Ramírez López, municipal coordinator of Civil Protection and Firefighters of Zapopan. As well as air support from the Tláloc and Witari helicopters.

In addition, more forestry brigades from the interior of the State and municipalities near the area will join.

The checkpoint was installed in the vicinity, from where the three levels of Government are coordinated, according to the governor’s statement on social networks.

He added that the fire does not put residential areas at risk, however, due to the smoke, “if you live in the area, close doors and windows and avoid outdoor activities.”

The commander added that the fire is divided into five fronts.

One of them is working with vehicles and water, in another front, the combat is being reinforced to contain the fire and prevent it from entering the forest, while another is in the lower part of the forest to prevent the fire to spread in that direction.

For his part, Luis Rodrigo Arellano Estrada, general director of Civil Protection and Firefighters of Tlajomulco, stressed that the municipality’s brigade is “defending the urban area between the Bosque Real de Santa Anita, Origen, and Natureza subdivision and the area where the fire”.

He reported that there are 15 injured brigadistas from the different corporations: eight in regular condition and seven in mild condition. Everyone is being cared for.